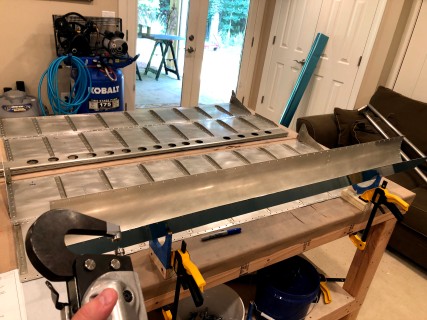 Riveted the skins to the nose ribs. 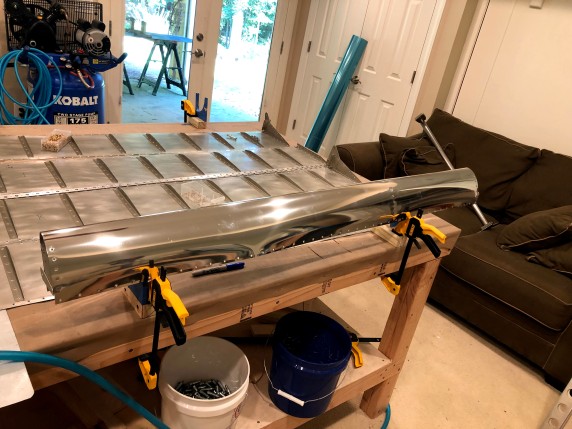 Blind riveted the spars to the nose ribs. 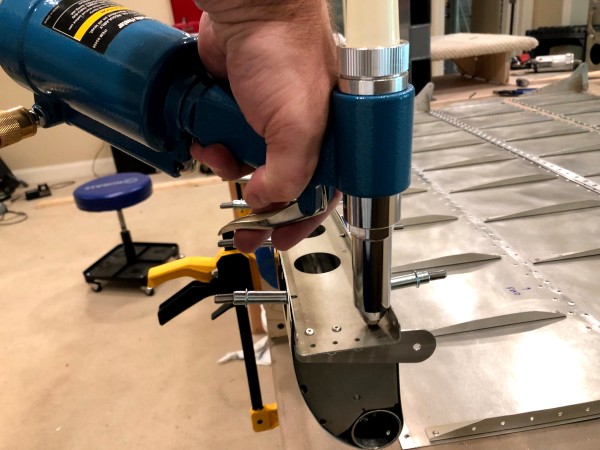 Prepared the left trailing edge by wiping it down the alcohol and applied the VHB tape to both sides. Then set it in place in the aileron and weighted everything down while resting the edge on a piece of angle iron. I remove the top backing tape by working my way across the aileron by removing a handful of clecos peeling the tape then replacing them with the next handful of clecos down the line until the whole backing tape was removed. I let the tape set up for a while and repeated the process for the bottom.

While the VHB tape sets up on the left aileron, I got started on assembling and riveting the right aileron. Got as far as riveting the top skin in place. 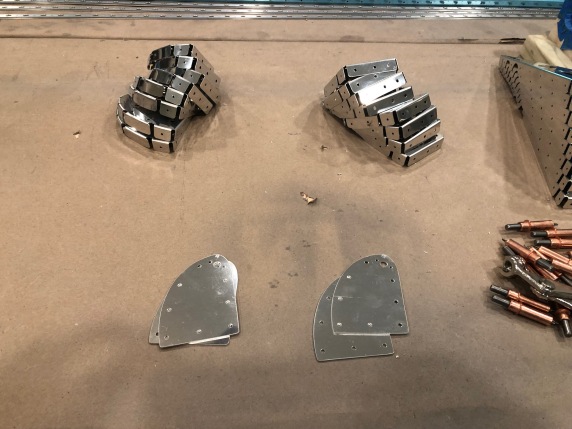 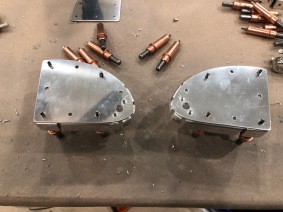 Clecoed the ribs to the flap hinges and final drilled all the #30 holes.

Modified all the main ribs by removing the top forward tab from each with the Dremel and a cutoff wheel. Finished with a bit of sanding to remove the burrs. 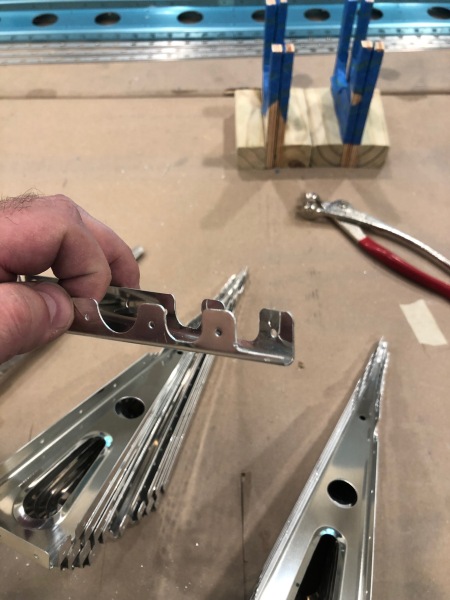 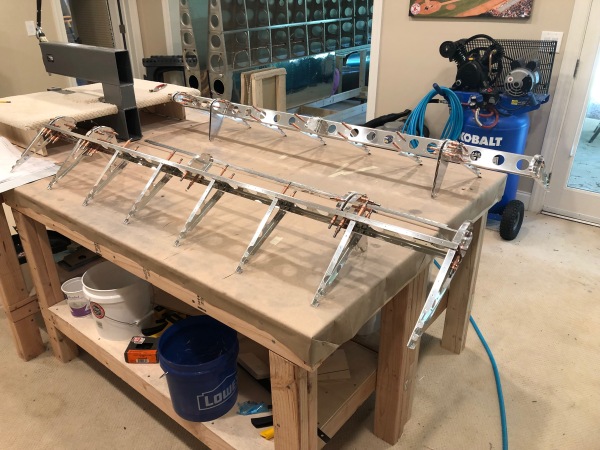 Trimmed the inboard and outboard trailing edges to final size with the bandsaw and finished on the scotch brite wheel.

Clecoed the flaps together.

Match drilled the two top holes in each of the nose ribs. I also final drilled all of the holes in the trailing edges.

Assembled the hardware in the hinge to hold everything in alignment and match drilled the four holes in the  trailing edge of the hinge.

Next I need to machine countersink the holes in the trailing edge wedge and the holes I just drilled in the hinges. Then dimple and prime everything.

Finished riveting the outboard leading edge to the left wing with a little help from Remy.

I set the left wing into the cradle and used the pneumatic stapler to attach the carpet suspending the outboard edge.

And that completes cradle construction.

Fluted and straightened the flanges of the tank ribs.

Riveted right outboard leading edge skins to ribs with some help from Remy.

Placed the leading edge back into the cradle and clecoed the J channel stiffener and the landing light bracket in place. I’ll rivet those in place tomorrow. It was getting late. 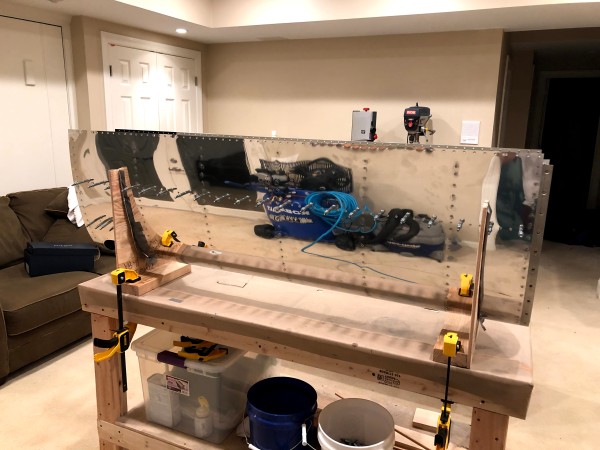 Sophie deburred the edges of all the tank ribs for me while I was in Toronto this week.

Clecoed the left leading skin to the ribs. 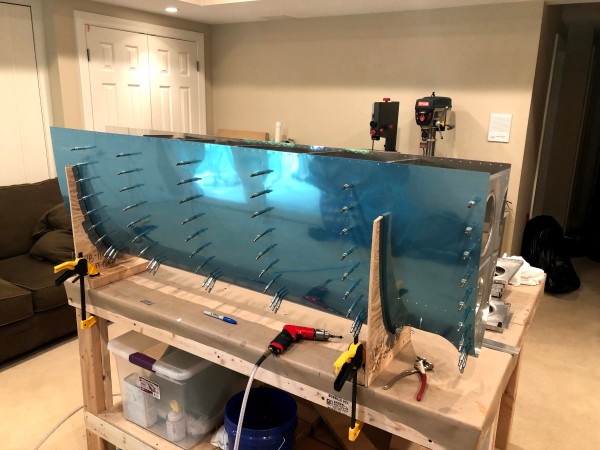 Slid the j channel into place and clecoed the starter hole. Then match drilled all the holes from the skin into the stiffener. 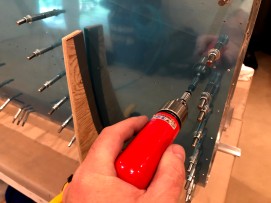 Match drilled the aft-most top and bottom holes in each of the ribs.

Disassembled everything and repeated the whole process for the right wing. Deburred and dimpled all the holes.

Dressed the edges of the skin with a file and sand paper.  The cut-outs for the landing lights were pretty jagged. I cleaned them up with an abrasive drum on the Dremel and some sandpaper. 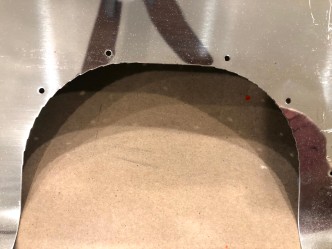 Dimpled the skins with the DRDT2 and scuffed the insides with a scotch brite pad.

Dimpled the rest of the parts. 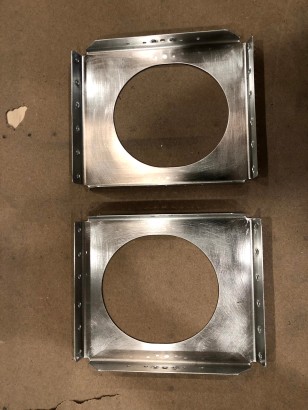 Everything is ready for priming and assembly.

Deburred all the edges of all the things. The doublers for the landing light lenses looked like they were crafted by Van’s with a chainsaw. You can see the before and after shot below. I used sandpaper to work the flanges around the nose of the ribs so that the skins don’t telegraph any faceting.

Trimmed the four ribs called out in the plans so that they will fit around the spar braces. Finished with files and sandpaper. 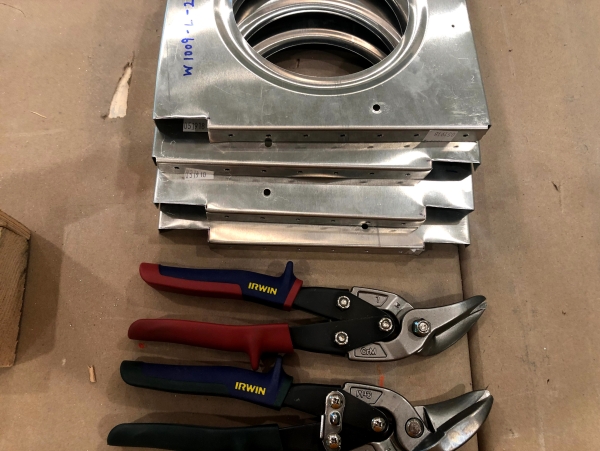 Flattened, straightened and fluted all the ribs. Then final drilled and deburred all the holes.

Dimpled all the holes with the squeezer. 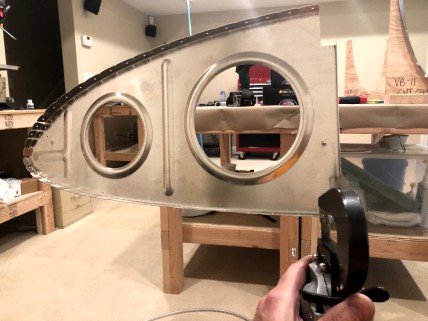 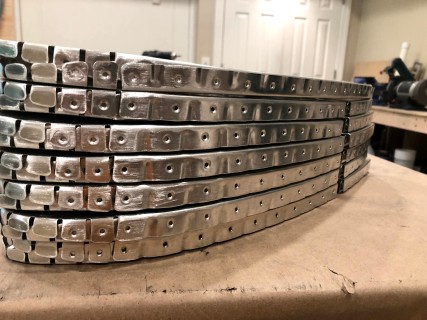 Cut the J-channel stiffeners to length and drilled the first inboard hole in each.

Final drilled #19 the screw holes in the splice strips. Carefully deburred the holes and dimpled for #8 screws. Dimpled all the #40 holes as well. 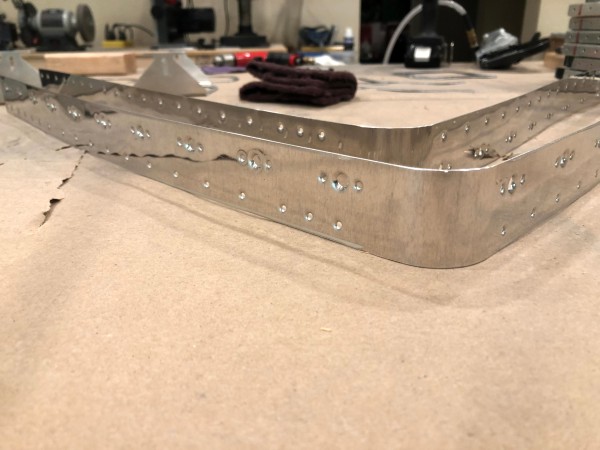 In other news, I received the order confirmation for the engine I ordered at Sun ‘n Fun. The ship date from Lycoming is October 11.

Riveted the rear spars to the wing ribs. I tried to use the squeezer but it was cumbersome with several different rivet sizes and with the flanges in the way. So I switched to the gun. This was much easier.

And of course, no section is complete without a few mistakes. I used the wrong size rivets in ribs behind the doublers. I used 4-4’s and needed 4-5’s the shop heads were too thin to be acceptable. So I drilled them all out. Nine rivets in total. I couldn’t punch the rivets out because there was nothing to back them up when I hit them with the punch. So I had to drill them all the way out. I was super careful but the holes are enlarged ever so slightly. If this wasn’t a critical structure, I’d probably just re-rivet it but this area carries the load from the ailerons and flaps. So I’ll go with a larger river to ensure structural soundness. I order some -5 rivets, a #21 drill, and a 5/32″ rivet set from Spruce.

I also put in an order with Van’s for some fuel tank sealant.

Riveted the forward flanges of all the ribs to the spar with the rivet gun. My riveting seems to be getting better… Didn’t have to drill any out. I set the pressure at the compressor to 75psi for the -4 rivets. This seemed to work really well. I had tried a lower pressure in the past and the manufactured head would get all beat up. At the lower pressure, I had to hit the rivet so many times that I think it was getting work hardened.

I also finished installing the AN3 hardware and torquing to spec. Kinda sorta starting to look like wings…

Picked all the parts (including the service bulletin kit) for the rear spar.

Decided to just get this out of the way tonight… 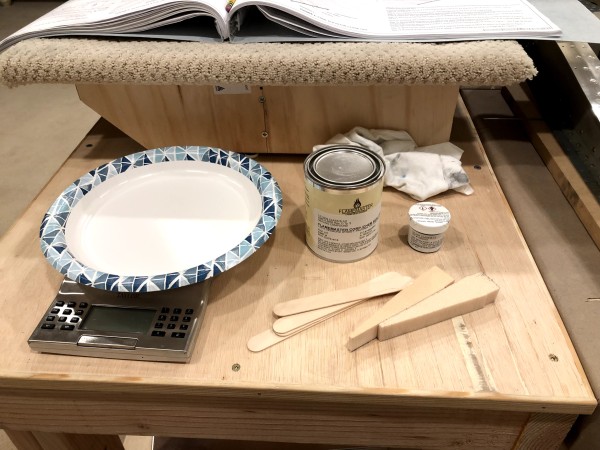 I went through three changes of gloves and still managed to get it on my hands.

Prepped the scuffed surfaces with isopropyl.

Bent the trim tab hinge pin per the plans.

I started off the day by taping the trailing edge to the bottom right elevator skin with the 3M VHB. tape.

I also completed the trim servo assembly. I need to order a crimper to terminate the wires from the trim servo with the supplied micro molex connector. I also need to get a label maker to label all the terminations. 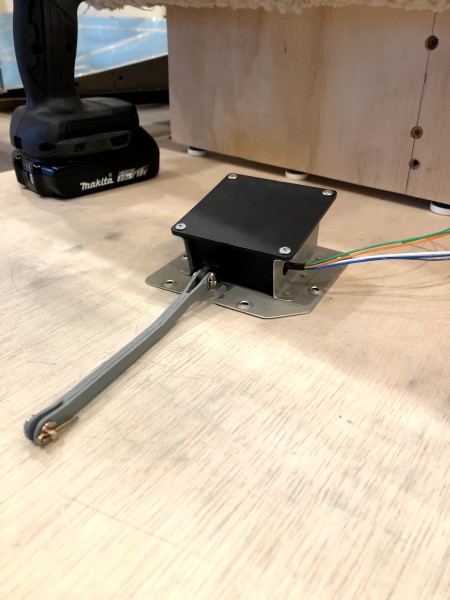 Then my new squeezer set from Aircraft Spruce showed up. It’s nice having them relatively local. If I order by 4:00 they’ll ship same day and shipping via UPS ground gets it here next day from Peachtree City.

With the new squeezer sets I was able to complete the riveting of the hinge portion of the skin to the aft spar.

I essentially completed all of the steps that I did to the right elevator yesterday to the left elevator today. So now both elevators are ready to have the aft ribs glued and the trailing edges riveted.