Mistakes were made. Learned a lot. Glad I learned these lessons on the practice project and not the airplane. Got lots of practice drilling out rivets.

I’ll be honest. I was dreading this step. I had never sprayed anything before. Turned out to be not nearly as bad as I thought. I didn’t get get pics of the process. Maybe next time.

My first attempt was on the practice project. Took a while to figure out how to get the gun set up. Shot way too heavy on the practice project. You can see how much darker those pieces are than the actual plane parts. I got it dialed in and I am happy with the result on the plane parts. They almost look like they’ve been anodized. They’re just a little darker and duller than bare metal.

The gun I used is a cheap touch-up hvlp gun from Harbor Freight. It’s perfect for the smaller parts and acceptable for the skins. I went with a narrow fan about 8 to 10 inches from the work with 30-40 lbs at the gun. I wiped everything down with lacquer thinner before I shot the primer. I mixed the P60G2 1-to-1.5 with the R7K44 reducer per the data sheet from Sherwin-Williams. The P60G2 was way more goopy than I expected. I was thinking it would be like paint. It was actually thicker and stickier. I wore a Tyvek suit, a 3M respirator, safety glasses, and nitrile gloves.

I bought an empty paint can at home depot that I am using to store and properly dispose of left over paint and solvent. I ran lacquer thinner through the gun and right into the can to clean up. It took about two ounces until it ran clear. 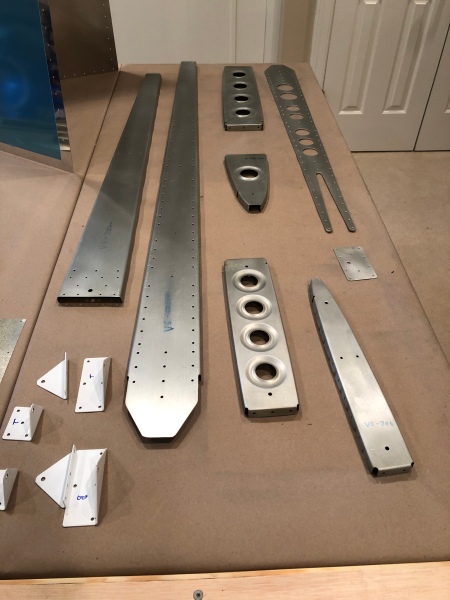 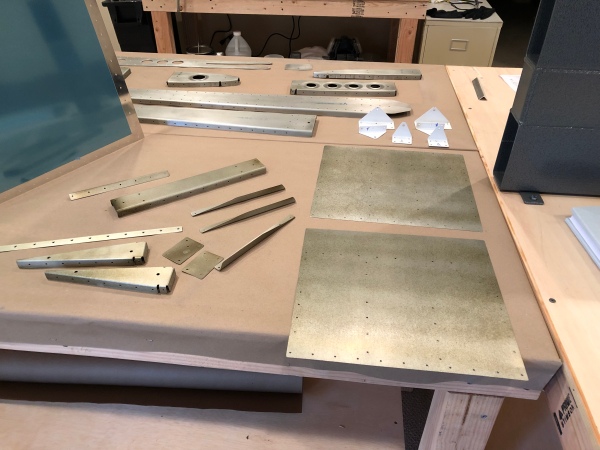 I clamped and drilled the trailing edge wedge. Then I disassembled everything, machine countersunk the wedge, and scuffed all the substructure parts and the inside of the skins in preparation for priming. Next we’ll clean up the surfaces with some lacquer thinner and shoot the primer and then dimple and rivet everything together.

Another two hours in. 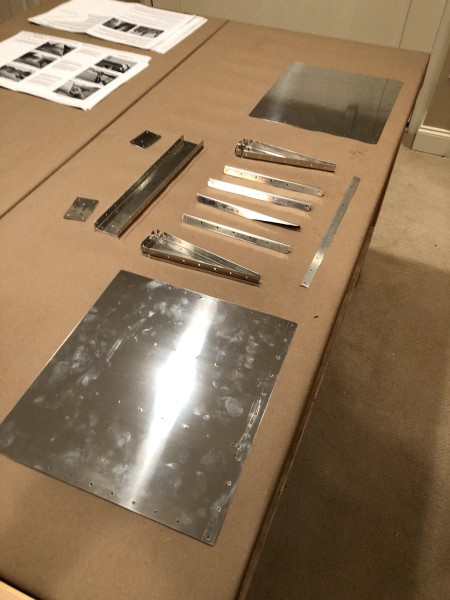 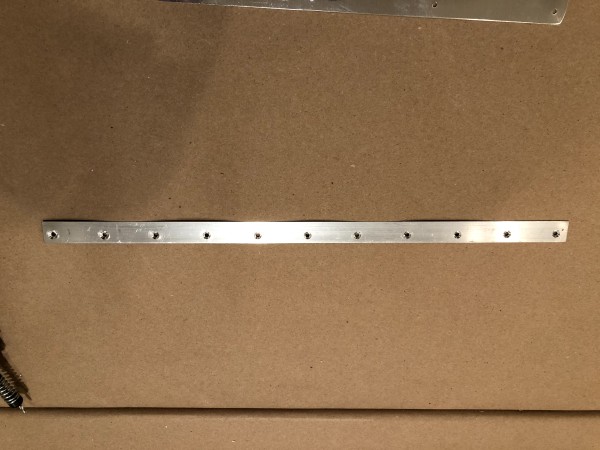 I think I’m getting the hang of this. I spent a couple of hours cutting, fitting, drilling, and de-burring this short section of control surface. Next I need to fit and drill the trailing edge angle. Then I’ll disassemble the whole thing and give the paint shop a trial run and shoot primer on the sub-structure and insides of the skins. Then I’ll rivet the whole thing together and move on to building an airplane.

I’m about two hours in at this point.

Remy and I completed another practice project. This one had us actually laying out rivets, drilling, countersinking, dimpling, de-burring, and riveting. After some good advice from my friends Jared and Joe, we made some adjustments to how we were holding the rivet gun and adjusted the air pressure to the gun. Way better results this time than on the last project. We’re learning so much. One more practice project to go and then on to the vertical stabilizer!

I also got to go flying with My buddy Jared in his RV-14 today. Amazing airplane. Thanks to Jared for the flight and all the good advice! I hope my plane looks and flies as well as his. 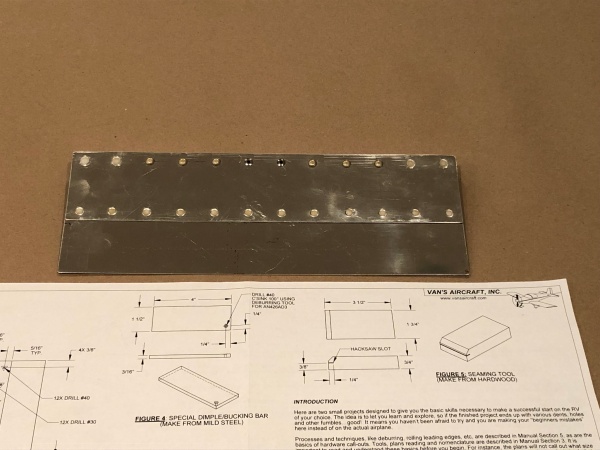 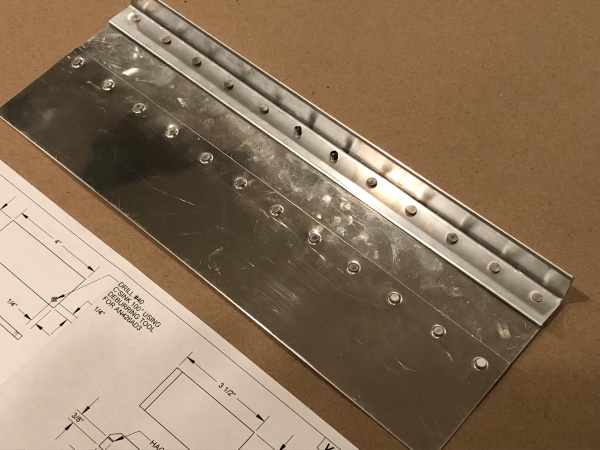 Sophie and I started off this morning by heading to the Sherwin-Williams store in Roswell to see if they had any P60G2. Of course they didn’t but they said that the Marietta store had 4 gallons in stock. Drove to Marietta. They had the P60G2 but no R7K44 reducer. When the lady in Roswell said they had the P60G2 I assumed they would have the reducer so didn’t bother to ask. The gentleman at the Marietta store indicated that they had the R7K44 at their Product Finishes Center in Lithia Springs but that they closed at 12:00. Swell. I bought the P60G2 from him and drove to Lithia springs in search of reducer. He was wrong. They are closed on Saturdays. I travel next week and return to ATL Thursday morning. So I’ll swing by Lithia Springs on the way home from the airport.

On a brighter note, the airplane factory is coming together. We gave it a trial run and built the Van’s toolbox practice project. Remy is a natural. All his rivets looked great. I mangled everything I touched. Despite my ham-handedness we managed to turn out a pretty neat toolbox. We had lot’s of fun learning new skills together. I’m going to complete the other vans practice project, a section of control surface, before I start work on the plane. The empennage should be here next week!

I also covered the two worktables I intend to use for assembly with heavy brown craft paper. I had a big role hanging around the house. I was thinking I’d pick up some carpet remnants but then thought I’d give the paper a try first. I just stapled it to the two-by-fours around the sides of the tables. Worked pretty well for us today. If it get’s messed up I can just rip it off and replace it. It seems like it will be pretty durable though. And it’s easily cleared of chips and scraps with a bench brush and dustpan. 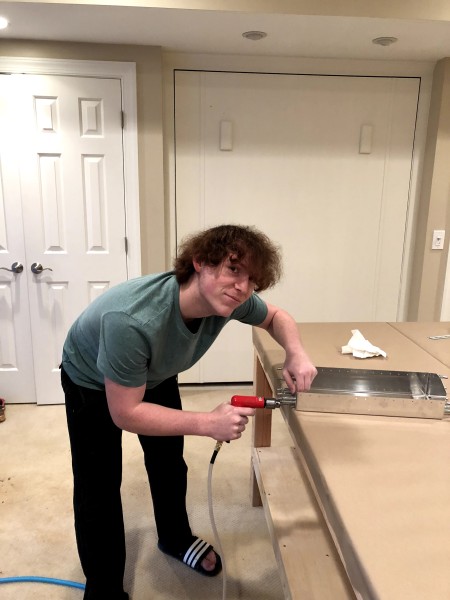 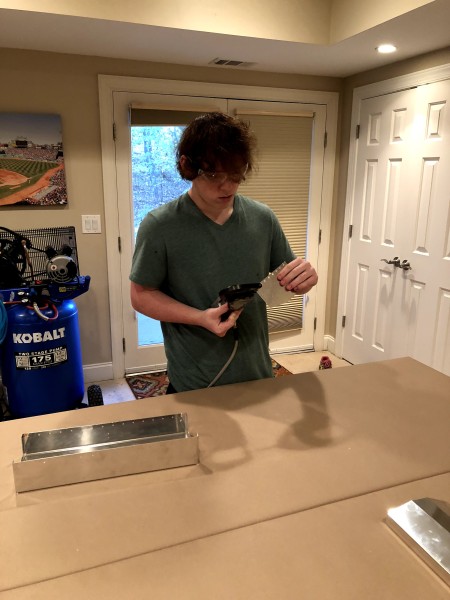 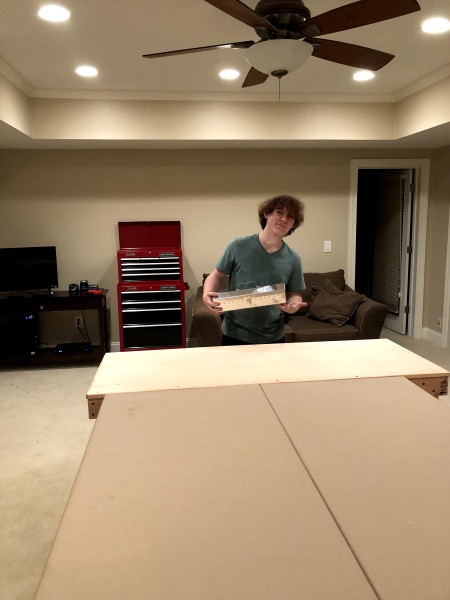