I’ve been using a single flute de-burring bit in my drill on the low speed setting to deburr all the holes. It seems to work pretty well. I hit it with about two turns and light pressure. That leaves a nice clean finish without enlarging the hole or leaving a visible chamfer. 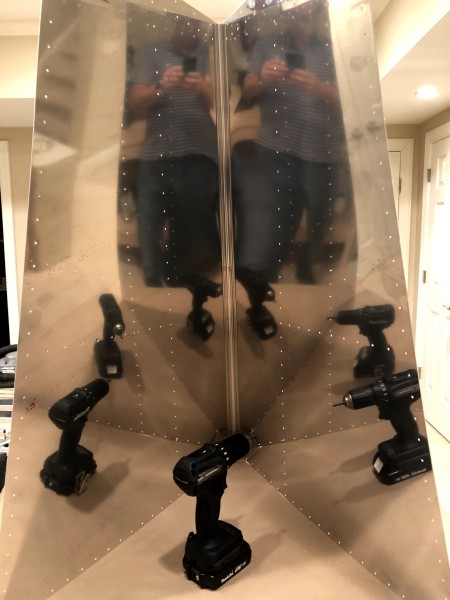 Today I dispelled the notion that this airplane is going to be perfect. I was trying to de-burr the edges of the skin on the scotch bright wheel and accidentally touched the other side of the skin to the grinding wheel. It hit the top corner of the skin and bent it a bit and took a nick out of the edge. I was able to straighten it. It was only bent a few degrees. I was also able to file the nick out of the edge. Probably not the worst mistake I’ll make. It only cost me about ten minutes.

I picked up a bit extension from home depot yesterday so that I could use the de-burring bit on the insides of the flanges. This kept the bit sufficiently straight and produced an acceptable result.

Used a maroon scotch bright pad and scuffed everything up. Ready for priming.